IHU Experiences the Joy of Graduating Its First Cohort 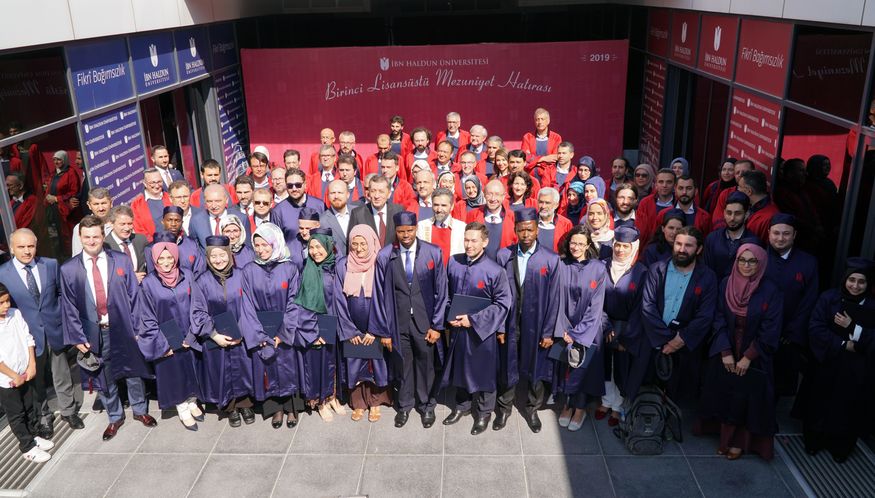 Ibn Haldun University held its First Graduate Commencement on July 6, 2019 in the Campus of Başakşehir. Joining this landmark occasion were Minister of National Education Ziya Selçuk, Chief Financial Officer of Turkish Airlines Murat Seker, President of Ibn Haldun University Prof. Recep Şentürk, Deputy Chairman of the Board of Trustees Necmeddin Bilal Erdoğan, Member of the Board of TÜRGEV Mevlut Uysal, academic staff, graduates and their relatives.

Following the academic march and the singing of the National Anthem, Prof. Recep Şentürk delivered the opening speech of the ceremony. Şentürk underlined that Ibn Haldun University was founded with the aim of being a graduate university. In line with that, Şentürk added, it is meaningful for our first graduates to be master’s and doctoral students. “If we think of Ibn Haldun University as a tree, the trustees would be the body, academicians and administrators would be the branches, and the fruits, then, are you our esteemed students” Şentürk continued “the values of our university, especially the ideal of intellectual independence, are the seeds of this tree”.

Professor Recep Şentürk continued his speech as follows, “As Ibn Haldun University, we are an intellectual movement that tries to lead a new paradigm in the field of social sciences and undertakes the architecture of a new understanding of social sciences. Our goal is to make our country and Istanbul a reputable knowledge center. Today, we look at the diploma that we are giving to our graduating students as a blessed trust; our graduates receive their diplomas in order to carry further the torch and the flag of intellectual independence”.

Addressing families, “you can be proud of your children. Because here I see the leaders of the future, respected scientists and managers”. Prof. Recep Şentürk ended his speech with the following words, “Just as we value you our students, you should also give importance and value to yourself. Your goal should be to be number one in the world in your fields. Consider this goal not with the claim of yourselves, but to represent the civilization you represent in the best way. Your real duty starts from now on. Even though your student status officially ends today, never forget that the link between us remains”.

Necmeddin Bilal Erdoğan, Deputy Chairman of the Board of Trustees, also delivered a speech at the graduation commencement. Reminding that there are more than 200 universities in our country today, Erdoğan said, “We did not set up Ibn Haldun University to be a traditional university as these 200 universities. This university was founded with a mission, to make up the shortfall that we felt. We dreamed of a university where people really will have the ability to produce ideas, produce knowledge, and to bring together people who dedicate their lives for this cause.”

“Education is to awaken the human being for ‘Now’”

The keynote speaker of the First Graduate Commencement was the Minister of National Education Prof. Ziya Selçuk. The minister started his address with these words, “I see a history here, not a history of two years, a history built on the concept of intellectual independence and quest. A core is being built here, a core of civilization. We are witnessing one of the most precious moments of a university with such a claim, an imagination beyond the claim and courage beyond the imagination.”

The Minister Selçuk stated that we are living in a world where we couldn’t be ‘graduated’ and every ending must be considered as a new beginning. “Education is to awaken people for ‘now’, it does not prepare them for the future. If education awakens people for ‘now’ there is a need to reinterpret the past and the future within the realm of the present” Minister Selçuk stressed out.

Selçuk, pointed out that the countries with the highest educational levels in the world, are the most polluting countries of the world, “such examples could be duplicated and in case morality did not come into effect as the cleaner of knowledge, it will be seen that the knowledge will lead to the destroy of all the humanity” assessed Selçuk.

After the graduate address delivered by Souhayla Taiai, graduate of Civilization Studies Master’s program, the graduates received their diplomas. At the end of the 2018-2019 Academic Year, graduates of Ibn Haldun University are 33 of the Civilization Studies program, 2 of them are PhD graduates, 8 from the Air Transport Management program, graduate from International and Comparative Law, Philosophy, Economics, Business Administration, Political Science and International Relations, Sociology, Clinical Psychology and Financial Economics programs.

Ibn Haldun University First Graduate Commencement ended after the traditional throwing of caps into the air and taking souvenir photos.